Council Weighs in on Wayne Future

There was much to celebrate but also a lot to take into consideration at Bothell City Council’s study session on July 12.

What began as a review of public surveys, visioning sessions, and the status of grants for land acquisition at Wayne Golf Course took a unexpected turn. After listening to introductory remarks by Forterra and OneBothell, the council heard a presentation by the independent consultant for the project, J.A. Brennan, and Bothell Parks and Recreation Director, John Keates. The results of the community survey taken by 1,063 people were projected on a screen for council and visitors to see. In the order of priority, the survey listed these : 1.Enjoy Nature, 2. Spend time with family and friends;, 3. Simple relaxation. 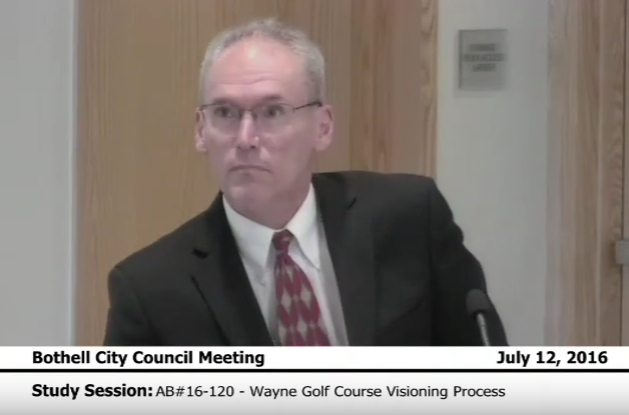 With the proposed maximum of 8 acres for ‘active use’ land in the new park (In his preliminary comments, OneBothell’s Jonty Barnes had recommended 6.5 acres utilized that way), the council was asked for its input regarding three topics. Its answers would impact the kinds of grants available for the buy-back of Wayne from Forterra, as well as the ongoing responsibilities of Bothell regarding maintenance.

The questions posed to the council were:

Council members were unanimous in their approval of a Conservation Easement on the back nine (similar to the existing front nine C.E.), allowing the land to remain undeveloped. This is a great step in helping manage the funding sources and protecting the future use of the Golf Course property. However, instead of agreeing with OneBothell’s recommendation to earmark a total of 6.5 acres with parking and structures just on the front nine, the council pushed back, citing the need for more active space and not being necessarily in favor of an onsite education center.

Councilmember Tris Samberg brought up the need for more active recreational areas in the city. “I would support creating as much active field space on the back nine, as possible” she said. She pointed out the deficient of sports fields in the city. Councilmembers Freed, Spivey, Duerr, and McNeal echoed their awareness of the lack of playing fields.

At OneBothell we think it’s great that council members have enthusiasm for more sports fields and even an aquatic center. However, we strongly believe Wayne is not a good choice for that use.

If the City has an appetite for active-use fields, a deeper look will find more cost-efficient opportunities in Bothell. (With two soccer addicts on the OneBothell board, we’d be happy to help!) For instance, a quick online search within the Bothell City limits locates several less expensive sites suitable for sports fields, such as this site near Centennial Park. With more than 10 acres and close to 405, it is less than half the cost at $2.6m. Example Property on Redfin.

Partnering with schools to find a suitable field space could be an even better approach. Northshore has already asked for help from the City in this regard. And as Mayor Rheaume pointed out, “The four acres on the front nine and the four acres on the back nine are the most expensive parts of the entire 90 acres… people need to keep that in mind. Yes, the grand total is a ballpark figure of $11m, but the actual value of the land in those two specific areas is probably half of that cost.”

Of the twelve grants already committed and/or pending, only one thus far could be designated for active use, such as structures, play fields, and parking lots. The remaining grants support only passive use, without impervious surfaces or structures. Whatever acreage the city chooses to designate for active use would require funding outside of these grants, with the city on the hook for purchase and maintenance. 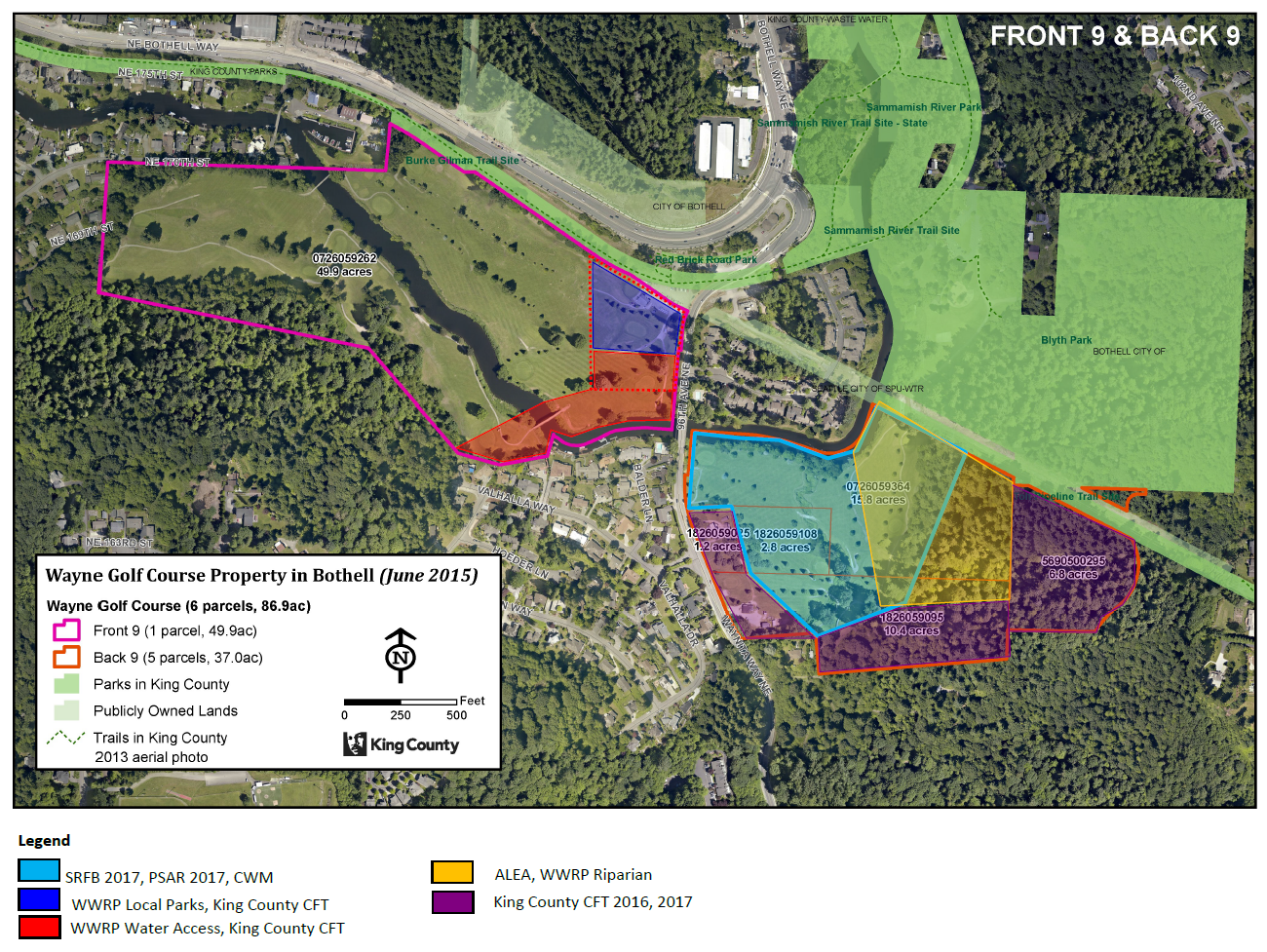 “The entire region is backing this [endeavor],” the Mayor reminded the council. “The state has come up big time to support this and basically, if we wanted to, we could probably get all this land for free [from grants] but it would be in conservation. ”

Later, the mayor said something that made OneBothell think hard about our mission. “Looking into the future, what I’d like to do is try maximize the opportunities for future councils and the community. We are going to be very developed here in the future. I think it’s by 2040 there’s 2.6m more people coming in Pierce, King and Snohomish County inside the urban growth boundary. That’s a lot of people. And so just having these little spaces—they mean a lot now, but they’re going to mean a lot more by 2040.”

Ultimately, most council members seemed to be leaning toward active use—preserving as much of the 8 acres as possible to that end. This will mean revisiting grants already in the pipeline. That, in turn, will inform the intricate and complex funding challenge that the City, County, State, Forterra, and OneBothell are currently navigating. Forterra’s clock is ticking, so we’ll need solutions soon from the city on how we’re funding these 8 acres.

As the visitors observing the study session streamed out of council chambers, much lively chatter ensued. Concern was expressed about the visioning sessions and survey that indicated the most favored use for Wayne is passive, not active, recreation. OneBothell’s mission is to save the land from development to improve habitat and water quality, as well as provide environmental education and interpretive opportunities for the community. The park plan won’t be decided until a Master Plan is in place. That will be developed with community input, and—rest assured—OneBothell will be here to represent the public.

Ultimately the evening gave us pause to reflect. Thinking beyond our own lifetimes, we realize what’s most important to the community today may change in the future. Bothell’s desire to keep this land unrestricted is a great outcome. If the City can find a way to purchase 8 acres for the public, it will keep all its options open.